Cuba: For the right to protest 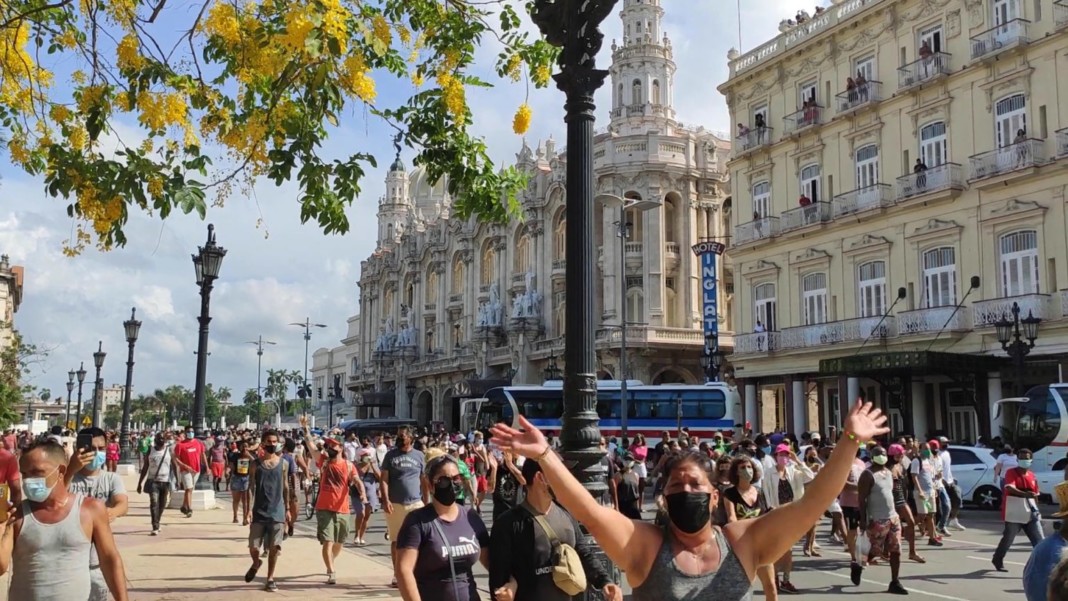 Protests in Cuba began after months of censorship against artists, activists, and journalists criticizing President Díaz-Canel’s administration. With the slogan «Patria y vida» («Homeland and life») protesters demand their right to freedom of expression, peaceful protest and civil autonomy.

Text by Ximena Torres, originally published by Zonadocs on July 17.

GUADALAJARA.- On June 26th, Hamlet Lavastida was arrested for an idea. After going through his cell phone, Cuban police detained the artist for a text message that he sent to his colleagues.

In the message, he proposed marking Cuban bills and coins with acronyms such as MSI (San Isidro Movement) and 27N (November 27). The intention was to establish organized artists and activists as a dissident force against the regime on the island, but the plan never came to fruition.

Even so, Hamlet has been deprived of his freedom for more than two weeks in the Villa Marista prison in Havana, accused of «intending to commit a crime.»

Similarly, in the past few months dozens of artists and activists have been disappeared, arbitrarily detained and had their mobility restricted by police after expressing critical positions on their country’s government.

These events are connected to protests on June 11th and days following, in more than 50 locations in Cuba, where attendees shouted mottos such as «Freedom» and «We’re not scared.»

They also chanted «Homeland and life», the title of a song by Maykel Osorbo and other artists that counters the famous phrase «Homeland or death» (Patria o muerte), which Fidel Castro repeatedly used as the slogan of the revolution that he led.

Maykel’s song paints a picture of the reasons why people took to the streets to protest against the administration of the current president, Miguel Díaz-Canel.

A grand celebration for 500 years of Havana

What are we celebrating if our people are desperate?

According to information from El Toque, a Cuban media outlet, due to unstable economic conditions in the country, essential products and foods have been bought and sold with divisas(foreign currencies) since 2019, which complicates access to these products for a majority of the population.

Additionally, the country’s main thermoelectric plants have become obsolete, causing outages lasting up to 12 hours in the last few weeks. The country’s COVID-19 situation has also worsened, as this article went to print, Cuba was breaking records with more than 6,000 new cases every day since July 9th.

Anamely Ramos, a poet and member of the San Isidro Movement, which defends cultural and civil rights in Cuba, understands the conflict as «the result of 60 years of a totalitarian state that prohibits any critique or protest,» where there is no freedom to dissent. This is the source of recent social outrage, which she described as spontaneous.

«The Cuban state has a history of repression of artists as well as activists, but on top of that, they’ve blocked all civil initiatives relating to civil rights They don’t want any kind of autonomy separate from their official version, they don’t want empowerment of a civil society,» Anamely explains.

According to the poet, an example of this is the government’s official discourse, which always downplays the legitimacy of the people’s demands related to the US-Cuba conflict. Only this time, they’ve built an air of polarization and have incited civilian confrontations.

«We will not allow any counterrevolutionary or mercenary sold to the U.S. empire to provoke instability in our country. We call on all revolutionaries and communists to take to the streets of these protests and confront them,» President Díaz-Canel said on July 11 during his appearance on national television.

The popular initiative Cuba Decide has records leading up to July 13 of over 150 people who were detained or disappeared by the National Revolutionary Police, special forces, Black Berets, and other plainclothes police during the protests.

Also on July 13, the authorities of the Ministry of the Interior confirmed the first death caused by confrontations between civilians and police. The victim was Diubis Laurencio Tejada, aged 36, killed in the municipality of Arroyo Naranjo in Havana.

Several media outlets, among them Periodismo de Barrio, have confirmed internet outages to the majority of the island on the day the protests started. Servicio de Información de ETECSA, the only phone provider in Cuba, confirmed that their system has defects. People know that the outages are intentional, however, because they’ve happened during previous protests.

«There’s public unrest, the Communist Party of Cuba doesn’t represent us. There’s an alarming epidemic, they suppress and jail artists and activists, there’s police violence, there’s massive internet outages Nothing is guaranteed, we’re at the mercy of a military dictatorship. In recent days, however, it’s become obvious that the state’s days of impunity are numbered,» Cuban poet Katherine Bisquet said. 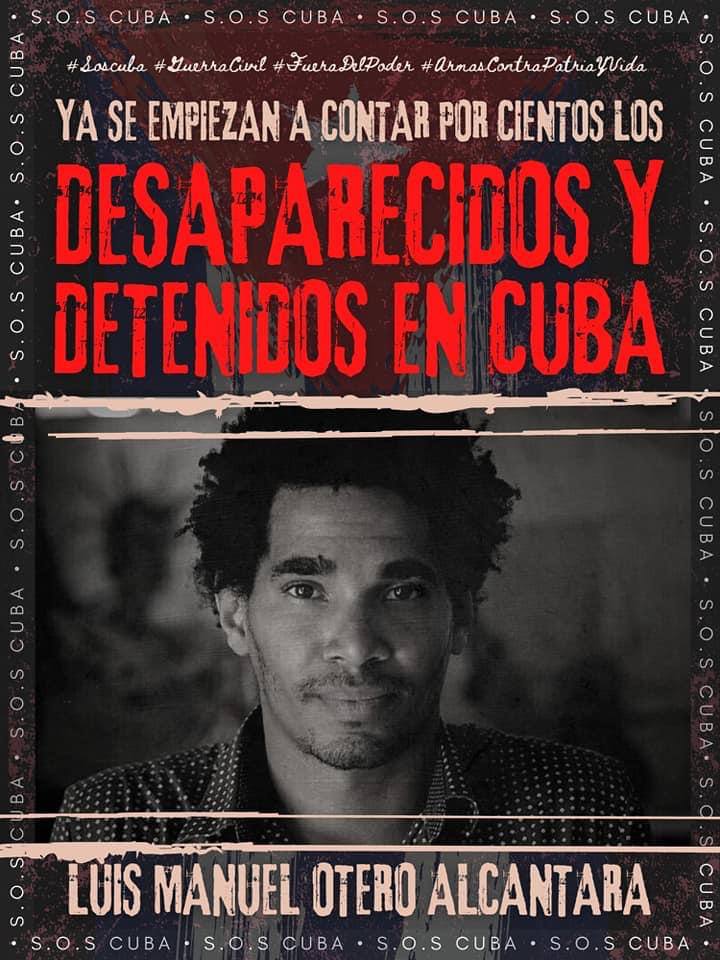 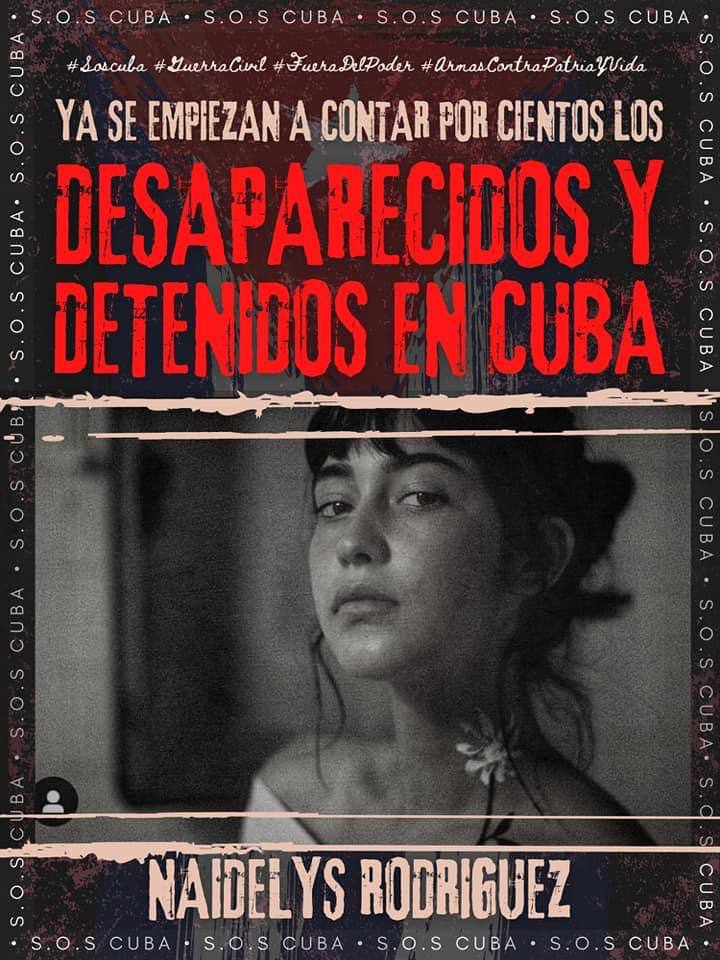 A flurry of censorship against artists and activists

Repression of artists and activists against the Cuban government has been on the rise since November 2020, when police removed rapper Denis Solís from his home without an arrest warrant. The artist had shared messages about the liberation of his country on Facebook, and in turn, in an expedited trial, was sentenced to eight months in prison for contempt.

Denis, who recently fulfilled his sentence, is also part of the San Isidro Movement (MSI), the organization of artists and activists from Havana’s San Isidro neighborhood. It was founded in 2018 in opposition of presidential Order 349, which required artists to request authorization before participating in any performances or exhibits.

After Denis was imprisoned, MSI members began a hunger and thirst strike to demand his freedom. On the tenth day, November 26, 2020, Cuban security forces broke into the movement’s headquarters and broke up the strike with violence. They took people captive for hours, among them Anamely Ramos and Luis Manuel Otero.

As a result, more than 400 artists, activists and independent journalists held a sit-in on November 27th outside the Ministry of Culture in Havana. They demanded the «right to have rights,» freedom of expression, and freedom for the detained.

Since then, surveillance has been non-stop. Some participants in the protest, especially women, have been restricted to their homes for months. Even without official orders, police have surrounded their homes, forbidden them to leave, and cut their phone and internet lines. According to the MSI, between 20 and 30 people are in this situation.

In February 2021 the song «Patria y vida» was released, since then, the artists behind the song have been persecuted. Among them is Maykel Osorbo, whom they tried to arrest on more than one occasion; he was finally apprehended on May 18. The UN Committee on Enforced Disappearances categorized him as disappeared after he was incommunicado for 14 days. Soon after it became known that he was in a detention center, accused of «disobedience, resistance and contempt.»

On April 30th, six more people peacefully protesting on Obispo Street in Havana were detained for «public disorder and resistance.» Among the detained was activist Thais Marlene Franco, since held in the Guatao Prison for Women; Franco has serious health problems.

In response to the wave of repression and violence, the European Parliament published the «Resolution on the human rights and political situation in Cuba» on June 9th, which assured:

«The systematic violation of human rights by the Cuban authorities has been common practice,» and that «April has been the most repressive month since the start of 2021.» The Cuban Observatory of Human Rights documented more than 1,018 repressive actions against human rights defenders and independent journalists; of these actions, 206 were arbitrary detentions and 13 involved serious violence.»

Even at these great costs, Anamely Ramos says that protests by artists, journalists and the MSI have played an important role in the expression of groups against the regime, and because of this, a greater chance of reaching freedom for their people. 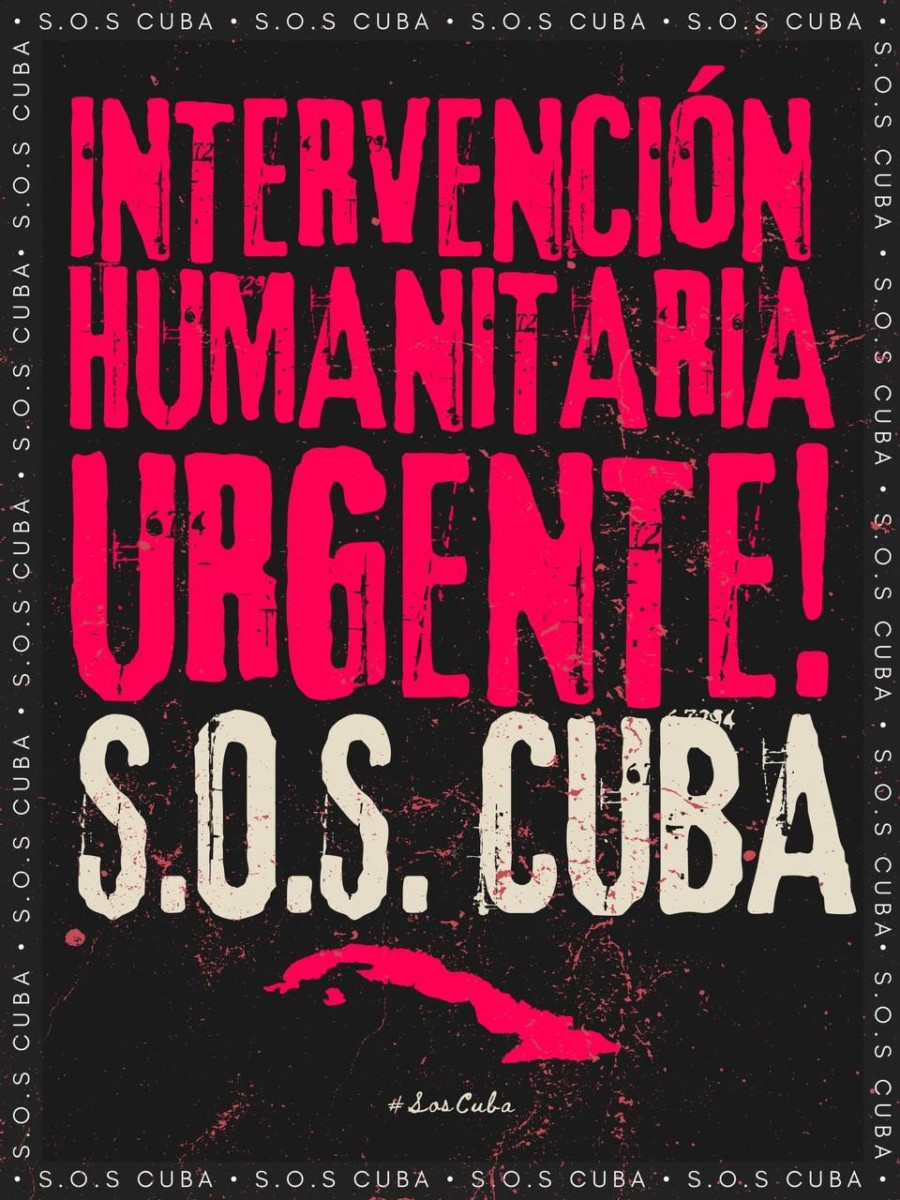 According to the organization Prisoner Defenders, as of July first, there were more than 150 political prisoners in Cuba. After the recent protests, more have been added to the total. From within the island and abroad, activists and organizations demand their freedom.

Anamely Ramos has also called on the United Nations and the European Union to denounce the current state of terror in the country.

«We have one demand: freedom from a dictatorship. We don’t want this totalitarian system. We want to be free, to live in a democratic system where all of our rights are respected. We want a sustainable country, one with a future,» Katherine Bisquet says.

A change in government would also mean the end of ideological filters, which would improve access to the right to work, free elections, and constitutional changes so that socialism is no longer the only political system, Anamely explains.

In the long run, they seek guarantees to their rights to peaceful protest, legitimate legal defense, as well as the freedom of expression and the possibility of the creation of artistic projects separate from the state. They also seek more visibility for civil initiatives to tend to problems such as gender, police and animal violence.

«The people have taken the streets. The people now have power over their own destiny,» Katherine says. 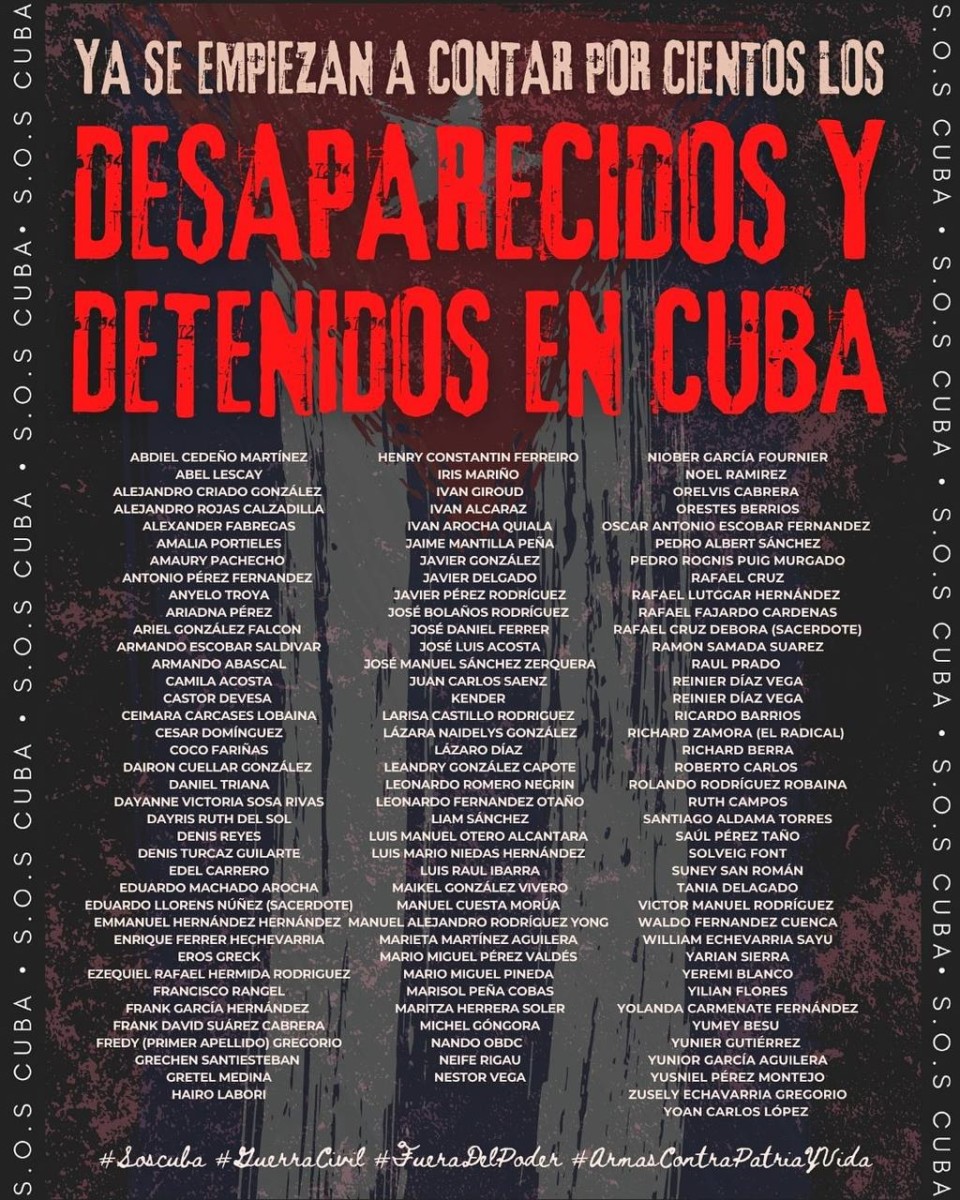